The first part of this post presents a simple feedforward neural network that solves this task. In the second part of the post, we will improve the simple model by adding to it a recurrent neural network (RNN). The final part will discuss two recently proposed regularization techniques for improving RNN based language models.

To begin we will build a simple model that given a single word taken from some sentence tries predicting the word following it.

The model can be separated into two components:

The decoder is a simple function that takes a representation of the input word and returns a distribution which represents the model’s predictions for the next word: the model assigns to each word the probability that it will be the next word in the sequence.

To train this model, we need pairs of input and target output words. For the (input, target-output) pairs we use the Penn Treebank dataset which contains around 40K sentences from news articles, and has a vocabulary of exactly 10,000 words. To generate word pairs for the model to learn from, we will just take every pair of neighboring words from the text and use the first one as the input word and the second one as the target output word. So for example for the sentence “The cat is on the mat” we will extract the following word pairs for training: (The, cat), (cat, is), (is, on), and so on.

The biggest problem with the simple model is that to predict the next word in the sentence, it only uses a single preceding word. If we could build a model that would remember even just a few of the preceding words there should be an improvement in its performance. To understand why adding memory helps, think of the following example: what words follow the word “drink”? You’d probably say that “coffee”, “beer” and “soda” have a high probably of following it. If I told you the word sequence was actually “Cows drink”, then you would completely change your answer.

We can add memory to our model by augmenting it with a recurrent neural network (RNN), as shown below.

This model is similar to the simple one, just that after encoding the current input word we feed the resulting representation (of size 200) into a two layer LSTM, which then outputs a vector also of size 200 (at every time step the LSTM also receives a vector representing its previous state- this is not shown in the diagram). Then, just like before, we use the decoder to convert this output vector into a vector of probability values. (LSTM is just a fancier RNN that is better at remembering the past. Its “API” is identical to the “API” of an RNN- the LSTM at each time step receives an input and its previous state, and uses those two inputs to compute an updated state and an output vector2.)

Now we have a model that at each time step gets not only the current word representation, but also the state of the LSTM from the previous time step, and uses this to predict the next word. The state of the LSTM is a representation of the previously seen words (note that words that we saw recently have a much larger impact on this state than words we saw a while ago).

As expected, performance improves and the perplexity of this model on the test set is about 114. An implementation of this model3, along with a detailed explanation, is available in Tensorflow.

The importance of regularization

114 perplexity is good but we can still do much better. In this section I’ll present some recent advances that improve the performance of RNN based language models.

We could try improving the network by increasing the size of the embeddings and LSTM layers (until now the size we used was 200), but soon enough this stops increasing the performance because the network overfits the training data (it uses its increased capacity to remember properties of the training set which leads to inferior generalization, i.e. performance on the unseen test set). One way to counter this, by regularizing the model, is to use dropout.

The diagram below is a visualization of the RNN based model unrolled across three time steps. x and y are the input and output sequences, and the gray boxes represent the LSTM layers. Vertical arrows represent an input to the layer that is from the same time step, and horizontal arrows represent connections that carry information from previous time steps. 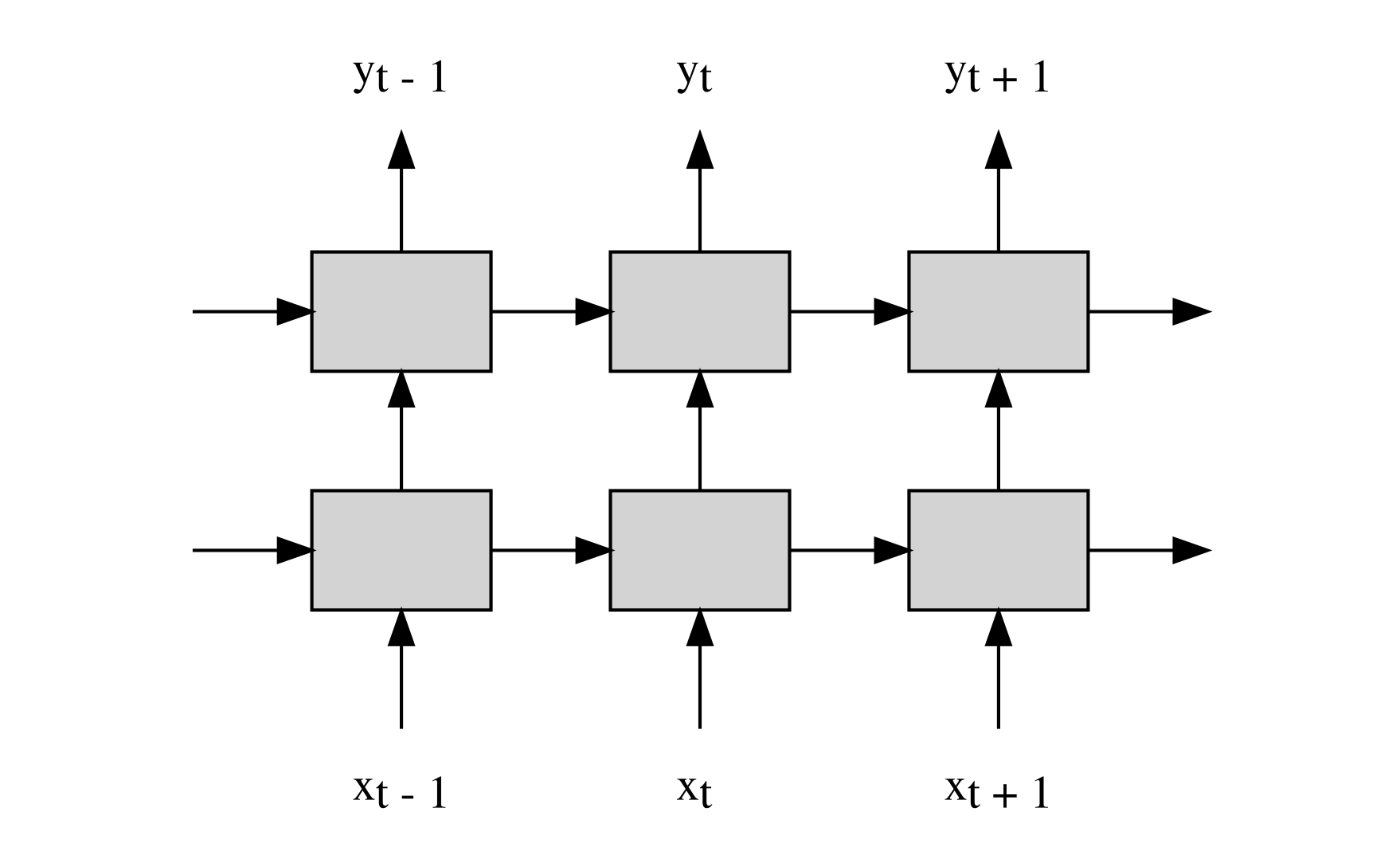 We can apply dropout on the vertical (same time step) connections: 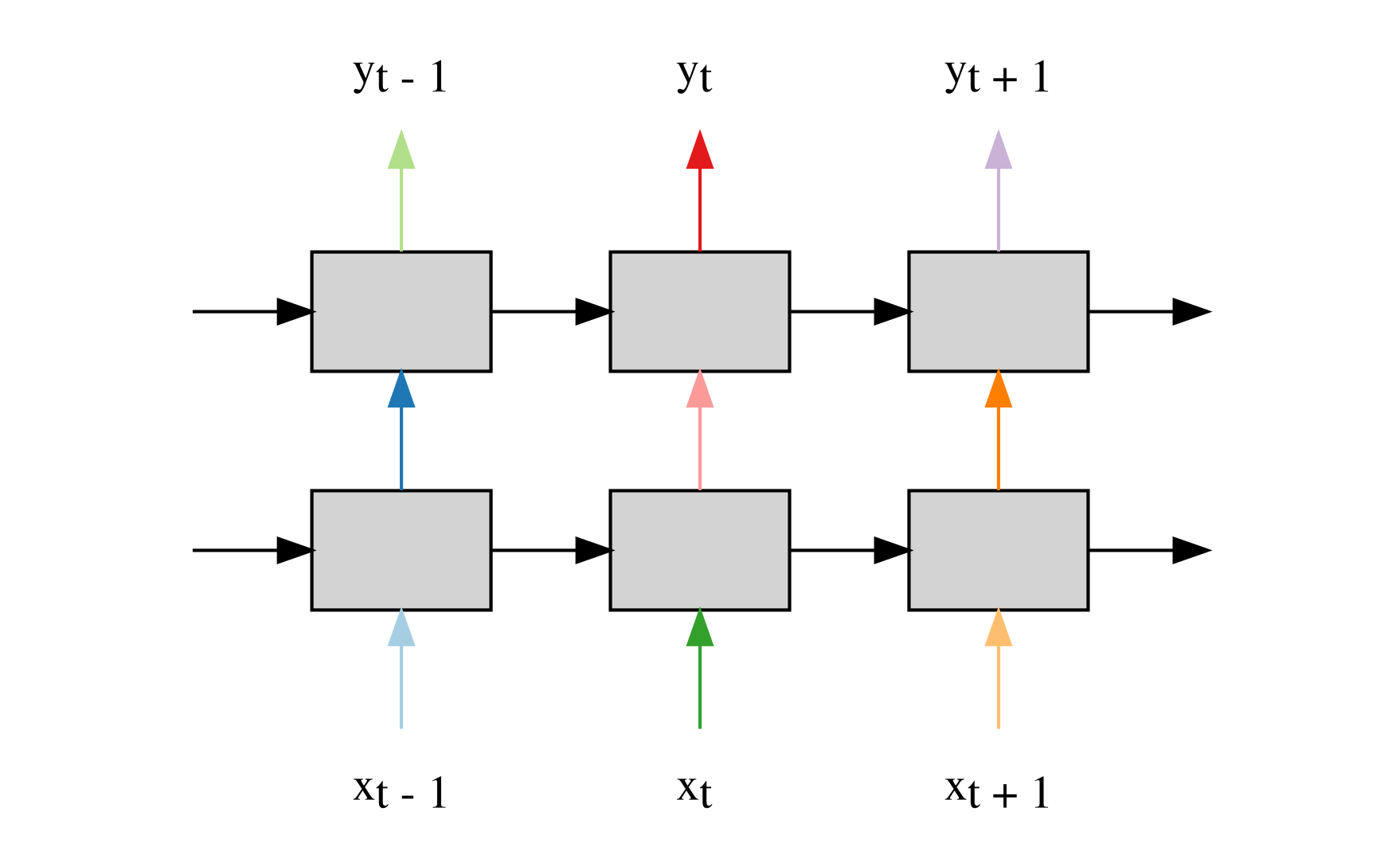 The arrows are colored in places where we apply dropout. A dropout mask for a certain layer indicates which of that layers activations are zeroed. In this case, we use different dropout masks for the different layers (this is indicated by the different colors in the diagram).

Applying dropout to the recurrent connections harms the performance, and so in this initial use of dropout we use it only on connections within the same time step. Using two LSTM layers, with each layer containing 1500 LSTM units, we achieve a perplexity of 78 (we dropout activations with a probability of 0.65)4.

The recently introduced variational dropout solves this problem and improves the model’s performance even more (to 75 perplexity) by using the same dropout masks at each time step. 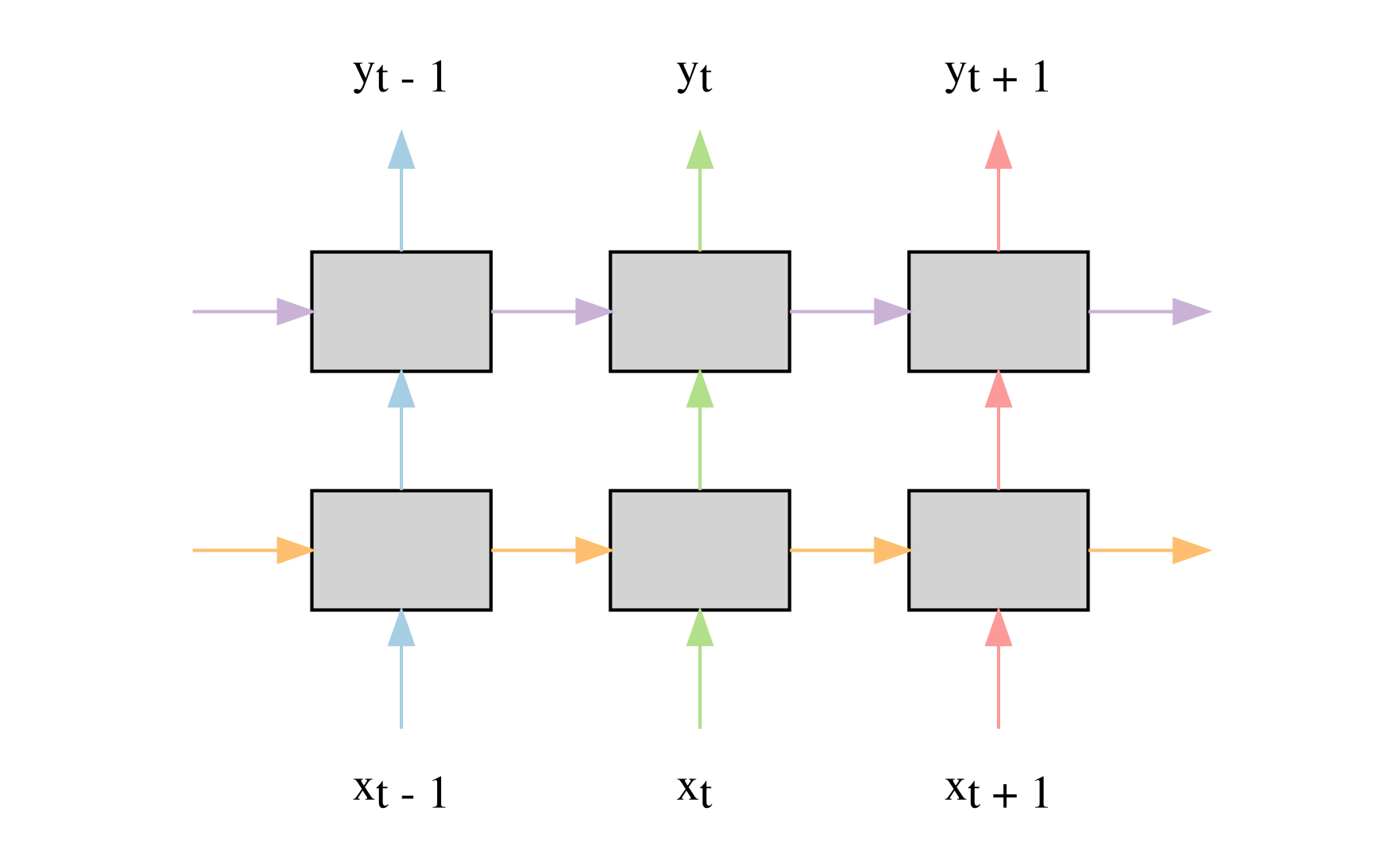 The second property that they share in common is a bit more subtle. In the input embedding, words that have similar meanings are represented by similar vectors (similar in terms of cosine similarity). This is because the model learns that it needs to react to similar words in a similar fashion (the words that follow the word “quick” are similar to the ones that follow the word “rapid”).

These two similarities led us to recently propose a very simple method, weight tying, to lower the model’s parameters and improve its performance. We simply tie its input and output embedding (i.e. we set U=V, meaning that we now have a single embedding matrix that is used both as an input and output embedding). This reduces the perplexity of the RNN model that uses dropout to 73, and its size is reduced by more than 20%5.

Why does weight tying work?

The perplexity of the variational dropout RNN model on the test set is 75. The same model achieves 24 perplexity on the training set. So the model performs much better on the training set then it does on the test set. This means that it has started to remember certain patterns or sequences that occur only in the train set and do not help the model to generalize to unseen data. One of the ways to counter this overfitting is to reduce the model’s ability to ‘memorize’ by reducing its capacity (number of parameters). By applying weight tying, we remove a large number of parameters.

To summarize, this post presented how to improve a very simple feedforward neural network language model, by first adding an RNN, and then adding variational dropout and weight tying to it.

In recent months, we’ve seen further improvements to the state of the art in RNN language modeling. The current state of the art results are held by two recent papers by Melis et al. and Merity et al.. These models make use of most, if not all, of the methods shown above, and extend them by using better optimization techniques, new regularization methods, and by finding better hyperparameters for existing models.